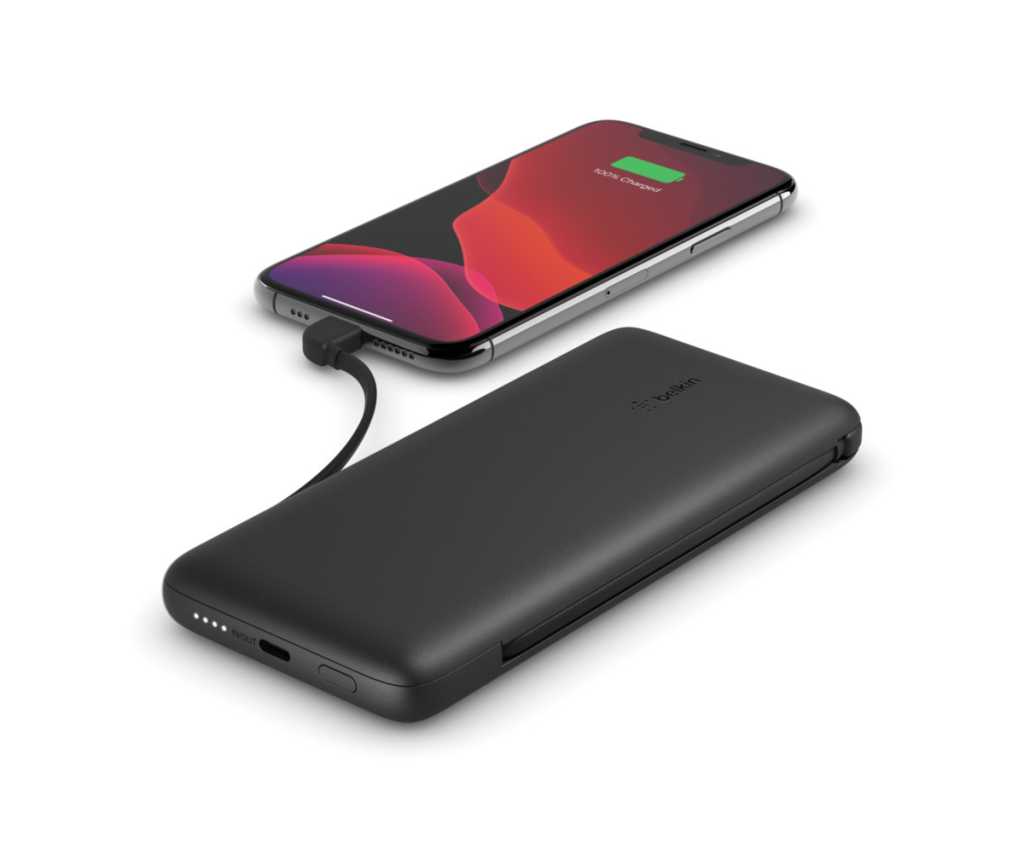 The Belkin Charge Plus 10K is perfect for someone who frequently needs to top off while away from home. Its small size along with built-in connections make it a portable battery pack that’s all about convenience.

Belkin is a household name when it comes to accessories and other gadgets. The company’s BoostUp line of charging products has traditionally been a good, but slightly expensive, option for those who are looking for ways to charge at home or on the go.

For the last few weeks, I’ve been testing the Belkin BoostUp Charge Plus 10K, a 10,000mAh (37Wh) battery pack that has two built-in cables: one USB-C, one Apple Lightning connector.

Note: This review is part of our roundup of portable power banks. Go there for details on competing products and our testing methods.

The housing comes in the standard battery-pack color of black, or you can pick the blue color option that, to my eyes, looks almost purple (while the cables themselves remain black).

On the front of the housing are four LED indicator lights, a USB-C port, and a power button. Each light represents 25 percent of the battery’s capacity, while the USB-C port is used to charge the pack itself, or connect a cable of your own to it and provide up to 18W of charging in either direction.

The built-in USB-C and Lightning cables are also capable of up to 18W of charging power, but the pack has an overall limit of 23W if you’re using more than one connection at a time.

One of my favorite aspects of the Charge Plus 10K is it’s size. It’s slim at just 0.7-inches thick, and weighs half a pound. Its overall footprint is smaller than my iPhone 13 Pro Max, making it easy to throw in a bag without taking up too much space. The charging cables fold into the sides of the pack, and while the cables are thin, they feel like they’ll hold up to routine use.

To evaluate the pack’s overall efficiency and charging speed, I connected to an AVHzY USB Power Meter to test the USB-C cable and the USB-C port’s output power. The USB-C port triggered all of the appropriate charging standards, including DCP 1.5A, QC 3.0, QC 2.0, Samsung 9V, and Huawei 9V, with full 18W charging. The built-in USB-C cable would not trigger the meter I use for testing, no matter what I tried. However, I was able to connect it to a Samsung Galaxy Z Fold 3 and the phone showed that it was fast charging, and expected to go from 19 percent to full in 1 hour and 22 minutes.

That same testing meter also lacks a Lightning port, so I wasn’t able to measure its output—however, charging my iPhone 13 Pro Max with the pack has been on par with using one of Apple’s 18W wall adapters.

Finally, to measure the charging speed as well as the battery’s efficiency, I connect the AVHzY USB Power Meter to a computer that charts the output and input. The total output of the pack was 31.46Wh out of a 37Wh capacity. That math translates to an efficiency of 85.03 percent, putting it just over the average efficiency of 83 percent for all packs I’ve tested. Charging the pack at 18W, took 2 hours and 36 minutes.

The pack supports passthrough charging, allowing you to charge the battery and a device (or devices) at the same time. You also don’t have to turn the pack on in order for it to start charging your phone or tablet.

I like Belkin’s products, and that opinion doesn’t change after using the BoostUp Charge Plus. It’s a reliable, if also slightly novel backup battery, that’s on the high end of the price scale for a 10,000mAh pack. However, the added benefit of integrated cables does mean you have one less thing to worry about when you’re packing. For some, that’s worth the added cost.

Note: When you purchase something after clicking links in our articles, we may earn a small commission. Read our affiliate link policy for more details.

Based in beautiful Colorado, Jason Cipriani is a freelance writer who contributes to, Greenbot, IGN, TechRadar, ZDNet and CNET.